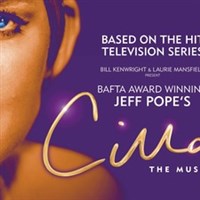 Sheridan first wowed fans and critics alike with her portrayal of the nation’s favourite singer and TV personality in Jeff Pope’s BAFTA award-winning ITV series. Cilla The Musical is the spectacular and heart-warming musical adaptation of the critically acclaimed hit ITV television series. It tells the extraordinary story of the ordinary girl from Liverpool whose teenage dreams of stardom lead her to becoming one of Britain’s best-loved entertainers of all time. The musical score is the ultimate soundtrack to the 60’s including Cilla’s  greatest hits Anyone Who Had a Heart, Alfie and Something Tells Me.

Ticket to Cilla - The Musical, plus return coach travel from Staffordshire.