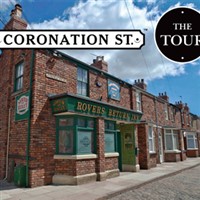 Coronation Street The Tour gives you the chance to explore the sensational outdoor sets at MediaCityUK, open to the public for the very first time.

Coronation Street has opened its doors to its newly created set located at Media City Salford Quays. Corrie bosses moved from the soap’s original site at Granada Studios after 53 years to a new home on Trafford Wharf Road in 2013. Continuum Attractions - which operated tours at the former Corrie set at the Old Granada Studios in Manchester city centre - will work with ITV and the team at Coronation Street to open up access to the external sets, which will include the famous cobbled street, Rosamund Street and the brand new extended Victoria Street.

The new-look Victoria Street is an extension of the original street which is home to the existing kebab shop, Roys’ Rolls, the community centre, Victoria Court and the infamous builders’ yard where Tina McIntyre famously fell to her death. Turning the corner and stepping out on to the most famous TV street in the world never gets old, it is such a massive thrill. Your 80 minute experience will take in Coronation Street, Rosamund Street and the newly extended, never before seen Victoria Street. The Tour is conducted by passionate guide with inside knowledge of the working set.

Wander through Weatherfield on a fully guided tour of the working set. Recall stories from yesteryear, hear filming secrets, take selfies on the street and follow in the footsteps of your favourite characters down those Coronation Street cobbles.

There will be free time for Lunch in Manchester City Centre prior to our afternoon tour.