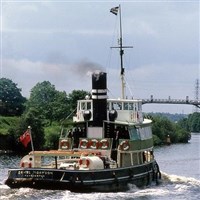 The Steamship experience with a unique story. The Daniel Adamson Historic 1903 Steam Vessel - affectionately nicknamed 'The Danny'. Cruise the Weaver Navigation - one of the UK's hidden gems Including free time in Chester!

The Daniel Adamson Historic 1903 Steam Vessel - affectionately nicknamed 'The Danny' -  has a unique story to tell!

Experience a moving visitor attraction – travel, float, celebrate and learn about a by-gone steam age as well as hear an intreguing secret about the boat’s unique luxury liner Art-Deco interior and where it came from.

Join us as we head firstly to the Roman City of Chester - free time for Shopping/Sightseeing/Lunch. We then head to Sutton Weaver for our 2.30pm depart aboard 'The Danny'. Our cruise duration is 2.5 hours. The Weaver Navigation as it is officially known, is one of the UK's hidden gem's - cruise through some of Cheshire's most stunning countryside. First made navigable to small craft in the 1700's, the Weaver grew on the back of the salt and chemical industry in Northwich and Winsford. We start our cruise by passing through the recently refurbished Sutton Weaver swing bridge and wind our way through some of the rivers most stunning scenery as we head for Dutton Locks then the final leg to Acton Bridge which dates from the 1930's and although of impressive size, the bridge swings with just the use of a few horse power due to its weight being borne by a floating pontoon. This Cruise may operate also from Acton Bridge to Sutton Weaver

1.The Danny is 15th on the National Register of Historic Vessels, alongside the Cutty Sark and S.S. Great Britain on the register maintained by National Historic Ships

3.The oldest steam passenger vessel in the UK

4.The project is a heritage partnership with Merseyside Maritime Museum as part of the Our Sea Our Story exhibition

6.A boat with many roles having been a working tug boat as well as a private vessel used to entertain by the directors of the Manchester Ship Canal

7.A boat which pre-dates the Titanic which holds secrets from the grand oceanic liners

8.The boat’s namesake, Daniel Adamson, was a pioneer in the use of steam boilers and was integral to the construction of the Manchester Ship Canal

9.The preservation of the boat has been supported and funded by The Heritage National Lottery with the restoration expertise and craftsmanship of Cammell Lairds – where the boat was originally built

The Historic boat was saved in 2004 when it was bought for £1 by an enthusiast to save it from being scrapped. Supported by a team of volunteers  and enthusiasts and with the huge help of Cammell Lairds which has expertly re-built the vessel and its engines with funding from The Heritage Lottery Fund.

The boat had a working life of over 80 years on the Mersey and Manchester Ship Canal where she was used both to tow trains of barges and to carry the society of the day in her splendid interiors.

The Danny now offers an unique sailing experince to the everyman with luxury interior saloons which are a celebration of the original art-deco style and have been re-created with interior and soft furnishings which have been recreated from original photographs to capture the ambience of the celebrated cruise liners of its day.

The boat evokes an interesting sense of nostalgia as many of the current volunteers once worked or have memories of the boat and still to this day are involved in its build and restoration and are pleased to see it stand proud once again on the Mersey waterways.

The Danny is lovingly supported by a team of passionate volunteers and members who have held hands over the project since 2004. Campaigning to save the boat and successfully gaining a 3.8 million Heritage Lottery Fund the team have waited to bring the boat back to the waters it worked so hard on and to give the little tug a new lease of life.

Now, they wish to hand the boat over to the next generation to learn skills that were part of the everyday of the boat and now maybe lost, to pass on stories of its heritage as an important part of the North West’s shipping history and to offer training and learning to people who may want the opportunity to work as part of a team in an industry which is integral to Liverpool and the Ship Canal.

Visit to Chester, 2.5 Hour Cruise aboard the Daniel Adamson, plus return coach travel from Staffordshire.