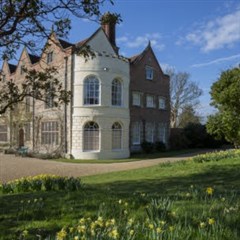 A wonderful 2 centre day, visiting firstly one of the most beautiful towns in England - followed by Greys Court a National Trust Property set in the rolling hills of the Chilterns

Henley on Thames and Greys Court

Henley on Thames is one of the most beautiful towns in England, recently voted by The Times as one of the best places to live in the English countryside and a regular winner of RHS Britain in Bloom  medals. Henley’s riverside location, surrounded by a Chiltern landscape of wooded hills and green fields, lends itself to relaxation, long lunches and quirky shopping. There’s a pub where Charles I drank, a Chantry house, a butcher that smokes his own meat and independent shops still offering the personal touch.

But it’s not just beautiful, Henley knows how to throw a party. It has an international reputation earned over 175 years by the world’s greatest rowing regatta, Henley Royal Regatta the town splashes out with the ‘joie de vivre’ of the summer arts festival and gets into the groove with ’80’s music festival Rewind. In fact Henley is a town of festivals offering a series of world class events to delight visitors and residents alike, you’ll find details of all of them on this site.

Henley’s historic heart sits just a few strides from the River Thames. The main street has many Georgian frontages covering older buildings and among the 300 buildings within the town designated ‘of special architectural or historical interest’ are St Mary’s Church, the Town Hall, Market Place and the 18th Century stone bridge.

An intimate family home and peaceful estate set in the rolling hills of the Chilterns.

This picturesque 16th-century mansion and tranquil gardens were home to the Brunner family until recent years. The house exudes a welcoming atmosphere with a well-stocked kitchen and homely living rooms. The series of walled gardens is a colourful patchwork of interest set amid medieval ruins.

Other buildings from earlier eras include the Great Tower from the 14th century and a rare Tudor donkey wheel, in use until the early 20th century.

Free time in Henley on Thames, Admission into Greys Court, plus return coach travel from Staffordshire.