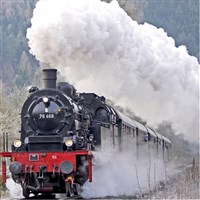 The line forms part of the old Midland Railway line between Manchester Central and London St Pancras which was closed in 1968, currently operating on approximately 4 miles of track between Rowsley South Station and Matlock.

The station in Matlock remains largely unaltered from its original heyday. It was designed in part by Joseph Paxton, the famed architect of the Crystal Palace in London.

Peak Rail has been operating since 1992, when a group of enthusiasts first began running preserved steam and diesel locomotives on a section of 19th Century heritage line between Matlock and Darley Dale.

We travel the return journey between Matlock and Rowsley, followed by free time in Matlock Bath.

Steam Rail Return Journey between Matlock and Rowsley, plus free time in Matlock Bath, plus return Coach travel from Staffordshire.