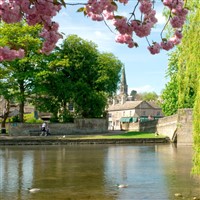 The origins of Well Dressing are lost in antiquity. They may even have their roots in pagan customs later given a Christian meaning. One theory says that the custom began just after the Black Death of 1348-9. Although the population round about was ravaged by plague, in Tissington all escaped, and the immunity was ascribed to the purity of the water supply. It became the custom to decorate the wells in thanksgiving.

Another tradition recalls the severe drought of 1615: “There was no rayne fell upon the earth from the 25th of March until the end of Maye, and then there was but one shower. Two more showers fell between then and the 4th of August, so that the greater part of the land was burnt up, both corn and haye.”

Despite the severity of this drought, when thousands of cattle perished and crops were lost, the five wells of Tissington flowed freely and the surrounding district had cause to be most grateful for the unending supply of water from the little village. A thanksgiving service was held and the wells were decorated each year in memory of the deliverance.

Visit to Bakewell on Market Day and Tissington, plus return coach travel from Staffordshire