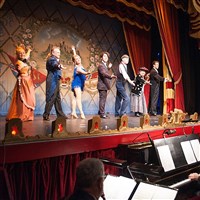 Enjoy an unrivalled bill of the cream of variety performers. The very stage where the BBC TV's 'The Good Old Days' was originally filmed

The longest running music hall in Britain. Built in 1865, this much loved venue, hidden in the heart of Leeds city centre, has survived virtually unchanged across three centuries while most other Victorian Music Halls have passed into history. The City Varieties was the location for the television series of 'The Good Old Days' and still operates a music hall season twice yearly in April and October. The Edwardian circle bar exhibits photographs of variety stars, past and present.

The theatre underwent a major refurbishment between 2009 and 2011, including a complete demolition and then reconstruction of the backstage areas, painstaking ceiling and plasterwork repairs, new carpeting and seating throughout the auditorium and major excavations to re-establish the ancient cellar network.

Despite numerous ownership and name changes, the City Varieties, as we know and love it today, has remained virtually unchanged since the late 19th Century.

Take your seats for a trip back to the Good Old Days of the music halls and enjoy an unrivalled bill of the cream of Variety performers. The legendary Variety stage spectacular returns featuring a different line-up each weekend on the very stage where BBC TV's The Good Old Days was originally filmed... as seen repeated recently on BBC 4!