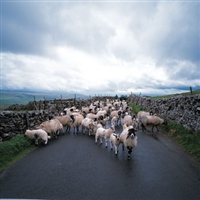 A fabuluous day in North Yorkshire. The charming market town of Thirsk - the home of the renowned vet James Herriot 'All Creatures Great & Small'.

It has a charm of its own, essentially unchanged and uninfluenced by the world. It centres around a bustling cobbled market square, dominated by the town clock, with its Monday and Saturday markets and independent shopping. Visitors from all over the world are impressed by the warm and friendly welcome of the residents of this gem of a town.

James Herriot
James Alfred Wight, who wrote under the pseudonym of James Herriot, became one of the most popular writers of the twentieth century.

His books, a series of stories based on his experiences as a young veterinary surgeon working among the farming community of North Yorkshire, sold in their millions throughout the world. Their great success spawned two feature films in the mid 1970s, followed by a television series, All Creatures Great and Small, which enjoyed global success in the late 1970s and early 80s.

Alfred Wight died in 1995 but his books still sell, the television series is still played throughout the world, and thousands of visitors continue to flock to The World of James Herriot Museum, which was established in 1999 in his hometown of Thirsk, North Yorkshire.

Visit to Thirsk with the option to visit the James Herriott Museum, plus return coach travel from Staffordshire.