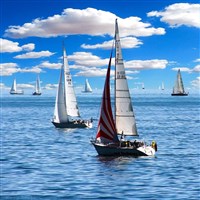 The Regatta is a boat lovers' dream with Yacht Racing and Rowing Teams. Plus Vintage, Classic, Sports Cars Rallies, Motorcycle Displays and Aerobic Stunts from the RAF Flying Team

Whitby,a seaside town in Yorkshire, split by the River Esk. On the East Cliff, overlooking the North Sea, the ruined Gothic Whitby Abbey was Bram Stoker’s inspiration for “Dracula”.

Nearby is the Church of St. Mary, reached by 199 steps. The Captain Cook Memorial Museum, in the house where Cook once lived, displays paintings and maps. West of town is West Cliff Beach, lined with beach huts.

The Whitby Regatta has taken place for over 170 years and is probably the longest running sea regatta on the North East Coast of England. In August every year the regatta offers a full weekend of yacht and rowing racing with the addition of various other types of entertainment around the town.

The Regatta started off as a much less grand affair back in the 1840’s with the local fishermen competing in their small fishing boats and salmon cobbles. In 1847 The Royal Yorkshire Yacht Club promoted the Whitby Challenge Cup, offering a prize of 50 guineas for the fastest yacht. From then on until the 1930’s the yacht races became the greater part of the Regatta.

Gradually the yachts were seen less and less, partly due to the high cost of building the vessels. In 1872 The Jet Works Amateur Rowing Club was formed, and this marked the start of competitive rowing races. Following years saw the addition of rowing teams from nearby Scarborough, newly formed teams from Whitby and even Tyneside.

In 1929 fancy dress and decorated floats were introduced to the annual weekend. This still forms part of the Whitby Regatta weekend and Carnival.

Our Setting Down Point is Outside the Co-Op, Langborne Road, YO21 1YW