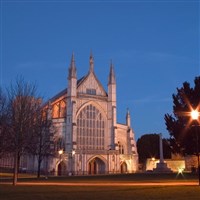 Winchester is the ancient Capital of Wessex, the County Town of Hampshire, England.

Winchester is the ancient Capital of Wessex and the County Town of Hampshire, England.

It’s the burial place of many of England’s Kings, Queens, Saints, and  famous people such as Jane Austen, Izaac Walton and Keats.

Here the rule of Common Law was established, the Domesday Book compiled, and  the  Winchester Bible written.

Winchester lies on the western edge of the South Downs National Park. With its historic buildings and tranquil water meadows, the city has always been popular with writers. John Keats stayed in Winchester from August to October 1819 where he wrote Ode to Autumn, and today visitors can follow the poet’s regular walk along the beautiful River Itchen to the nearby Hospital of St Cross, a Norman alms house founded in 1136. Another walk takes you up St Giles Hill with its panoramic views over the city to the Victorian prison where Thomas Hardy's heroine, Tess, met her terrible fate.

When Sherlock Holmes visited in the 1892 story The Adventure of the Copper Beeches, it took two hours to travel by train from London. Now (engineering works permitting) it takes an hour – one reason for the city’s popularity with families forced out of London due to ever-rising house prices.

Enjoy a memorable day in this historic City - there is so much to see and do!

To further enhance your day - Include a Guided Visit of Winchester Cathedral (Cost: £6.00)

See the Cathedral come to life with this guided tour. Experienced guides will point out some of the most treasured artefacts, tell some of their favourite stories and give a general overview of the Cathedral history. This is a very popular tour and offers a comprehensive introduction for first-time visitors.

One of the world’s most famous authors died in the Hampshire cathedral city of Winchester. Jane Austen was just 41 in 1817 and had been suffering from what is now known as Addison’s disease, a rare disorder of the adrenal glands. Austen had moved to Winchester for medical treatment, leaving her home in Chawton 17 miles away (now an Austen museum), where she wrote novels including Pride and Prejudice.

When she was buried in the north aisle of Winchester Cathedral, the inscription on her tomb made no mention of her novels, perhaps because they were published anonymously. A brass plate was later added which noted rather blandly that she was “known to many by her writings”.